The Cathedral of Seville is the largest gothic cathedral in the world, and the third temple in size after St. Peter's Basilica of the Vatican in Rome, and St. Paul in London. In 1987 it was declared a World Heritage Site by UNESCO.


The Cabildo Metropolitano has been the custodian of its rich history for seven centuries and wants to remain as it, every day with a more modern and accurate focus and organization. To do so it maintains the daily Liturgy and the celebration of the great feasts of Corpus and Inmaculada, handles devotion to the Virgen de los Reyes permanently, and makes extensive sacramental pastoral, as the first church in the Diocese of Seville.

The Cathedral is an unusual building, which has five precincts, which were distributed with perfect Muslim orientation, looking towards East. Its most controversial aspect is that it doesn’t have a header in the usual Gothic sense, in the form of an apse without ambulatory, as its hall floor is a perfect rectangle that corresponds exactly with that of the Alhama, from which itinherited, too, the unusual arrangement of the doors. In terms of the walls, they have little thickness. However, the chapels are separated by stirrups which are perpendicular to the axis of the central temple, finishing in 28 stuck on pillars, with 32 exempted others, holding 68 ogival vaults. Natural light is scarce, because the windows are small and bear beautiful stained glasses.

The Giralda,despite its autonomy, has the role of bell tower of The Cathedral of Seville. World Heritage Site since 1987, it’s notable not only for its location and history, but also for its architectural design, its function throughout the centuries and its meaning within the old town of the city. Its square base is located at 7.12 meters above sea level, with a side of 13.61 meters and a height of 104.06 meters. It was built basically in resemblance to the minaret of the mosque Kutubia in Marrakesh (Morocco), although the top and the belfry are from the European Renaissance. 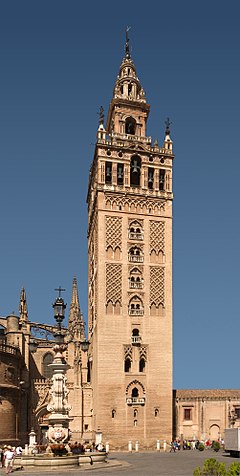 The central part hosts. The impressive central part hosts two charismatic buildings: the choir, flanked by large pipe organs, and the Capilla Mayor with its four floors, in which the mayor altarpiece stands. Among them there are three annexed areas: the of San Fernando Rey, el Crucero (whose vaults are the highest of the entire group) and the Trascoro. Each of these three zones correspond to the three hierarchies of the medieval city: the regia cathedral or Panteón de los Reyes; the ecclesiastic cathedral, reserved for the Archbishop and the Cabildo; and the popular cathedral, situated towards West.

The Capilla Realis the head of the cathedral. This is a unique construction, as it is a sort of Renaissance apse located where one would expect a large ogival ambulatory, typical of the Gothic style. The chapel is located in the pantheon of San Fernando Rey and his son, Alfonso, along with the graves of some other members of the royal family of that period. Also we find in it the Gothic image of Santa María de los Reyes, patron saint of the archdiocese of Seville.

The Treasures and the gallery. The treasures of the temple can also be remarked, as a large number of paintings by Murillo, like the portraits of San Isidoro and San Leandro; pictures like Santa Teresa, of Zurbarán, and the sculpted head of San Juan Bautista. The mausoleum of Cristóbal Colón, a work by Arturo Melida is in the right arm of the Cathedral’s cruise, and where remain the rests of the famous discoverer of America.

ALL VISITS OF SEVILLE